Known as the Outdoor Capital of the UK, Fort William is at the heart of a wide range of exciting activity centres. Visitors enjoy easy access to exhilarating hillwalking, mountain climbing, snow sports and water sports — as well as the gentler pleasures of a refreshing day spent fishing, walking in the country or cycling. Capture the spirit of the Scottish Highlands by taking in its stunning landscapes, tasting the area’s authentic whiskies and ales, and exploring its fascinating museums.

Situated in Lochaber in the West Highlands, Fort William is well connected to the main cities of Glasgow and Edinburgh with regular transport links by train and bus. It is approximately a two to three hour drive from both cities, although it is closer to Glasgow on the west coast.

The centre of town is small and compact, so it’s easy to get around on foot. There are also local buses and taxis to help you get around too. You can travel to the rest of Lochaber by car, by train, bus or ferries. Don’t miss the famously scenic train ride along the West Highlands Line which runs between Fort William and Mallaig was voted as one of the Great Railway Journeys of the World (as featured in the Harry Potter movies).

GET TO KNOW FORT WILLIAM AND LOCHABER

You can find out more about where to visit in Fort William and Lochaber, how to get around and plan the perfect break on outdoorcapital.co.uk

Fort William has everything you could possibly need while in the Highlands. The High Street has a reasonable range of shops, and outdoor enthusiasts are especially well catered for by large outlets at either end of the underpass leading to the railway station. Meanwhile the development area north west of the station houses a large supermarket and is essential visiting for anyone on a self-catering holiday.

There are a wide range of eating and drinking opportunities in Fort William, ranging from good fish and chips, to rather more upmarket establishments.

The town also marks the end of the West Highland Way, Scotland’s oldest and most popular long distance walk: and the start of the Great Glen Way. The steady stream of footsore travellers coming into the town from Glen Nevis is a reminder of just how far the 96 miles from Milngavie, near Glasgow, can seem. Meanwhile a fresher stream is embarking on the 73 mile trek to Inverness.

Following an extension, the West Highland Way now concludes at the south end of Fort William’s main street, where you are greeted by the seated statue of a resting walker looking out towards Loch Linnhe. The start of the Great Glen Way can be found within the Old Fort, on the shore of Loch Linnhe near the railway station.

There’s plenty to do in Fort William when weather or inclination rule out a day in the hills. The West Highland Museum and Highland Cinema in the centre of the town is excellent, while St Andrew’s Church, towards the north end of the main street, has a very attractive interior. Also well worth a look is St Mary’s Catholic Church, on Belford Road, and no visit should be considered complete without a look at the Old Fort, almost invisible to passing traffic on the shore of Loch Linnhe close to the roundabout at the northern end of the dual carriageway bypassing the town centre. At the north end of Fort William, overlooking the roundabout at the junction with the A830 to Mallaig, is Ben Nevis Distillery. This is not Scotland’s prettiest distillery, but it does have a lot to offer in the way of charm and a friendly welcome.

A couple of miles miles west, at Corpach, you can admire Neptune’s Staircase of locks on the Caledonian Canal. Also in Corpach is the wonderful collection of crystals, gemstones and fossils at Treasures of the Earth.

Meanwhile, no description of Fort William could be complete without reference to Ben Nevis, normally climbed from Glen Nevis, just to the north east of the town. This is the UK’s highest mountain. Though the Ben dominates the town in distant views, especially from across Loch Linnhe or from Corpach, it is invisible from most of Fort William itself due to the intervening ridge separating the town from Glen Nevis. Just a little further north east is the Nevis Range ski centre, with its gondolas taking you high onto Aonach Mor.

The Fort in Fort William was first built by Cromwell’s forces in 1654 to pacify the local Clans, especially the Camerons. It was first known as the Garrison of Inverlochy and was just a wooden stockade on an earth bank protecting 250 troops. Together with Fort Augustus and Fort George it was the lowest outpost of a chain of Government defences intended to suppress the “savage clans and roving barbarians” as Dr.Johnson later called the locals!

An early skirmish with the Camerons at Achdalieu resulted in an English Officer having his throat bitten out!

About 1690 a substantial Fort was raised with stone walls 20 feet high, a deep dry ditch and a bomb proof magazine. The Fort then became known as Fort William named after William of Orange – and the small village which grew up nearby was Maryburgh, named after his wife.

The reinforcements were well tested in 1746 when the 600 men in the Fort were sieged by the Jacobite Army – and despite several days bombardment from the Cow Hill behind the town, it survived largely intact. As the Highland Clans were pacified and the Jacobite threat diminished the Fort became less important, but was till manned by the regular army until the Crimean War in 1854. Latterly these soldiers were used to suppress the local smuggling trade rather than fight the clans!

The Fort was later sold and dismantled and was used as the Railway Yard for the West Highland Railway when it reached Fort William in 1894.

Part of the Old Fort can still be seen beside the roundabout and in front of West Highland College UHI. A plinth at its centre marks the start of the 73 mile “Great Glen Way” – a walk which follows the line of those early government defences to Inverness.

Fort William remains of strategic importance in the Highlands, no longer as a military stronghold but as a thriving centre of commerce and industry in Lochaber and at the foot of Britain’s highest mountain, Ben Nevis.

Multi award-winning Scottish band Mànran celebrate their 10th anniversary at the foot of Ben Nevis with an array of musical friends.

MÀNRAN: 10 BY THE BEN will be a two day music festival held over Easter weekend on An Aird shinty pitch in the heart of Fort William, Lochaber.

Mànran host the event with an array of musical friends and guests to celebrate their big 10 year anniversary.

Saturday 11th April 2020 kicks off with the Glenfinnan Ceilidh Band, followed by Flook, Donnie Munro and finished by Mànran.

14-17 year olds must be accompanied by an adult. 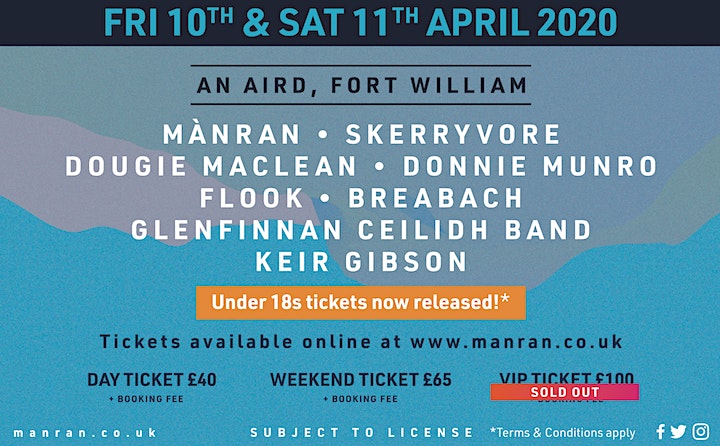 The Scottish Six Days Trial itself always runs from Monday to Saturday, starting on the first Monday in May, which is always the May Day Bank Holiday in the UK. If you know the date of the May Bank Holiday then you know when the SSDT is! However there’s loads more to see and do before that. The Trials action kicks off in Lochaber on the Friday before the SSDT with the two-day Pre ’65 trial taking place, based in the small town of Kinlochleven near to Fort William. Then there is the buzz of the SSDT paddock on Sunday with the annual “weigh-in” of the competitor’s bikes before the traditional parade of riders down Fort William High Street in the afternoon. If you want to get away from Trials for a while or you have family with other interests, there are all sorts of other things to do and see in the area!

What is the Scottish Six Days Trial?

The Scottish Six Days Trial is a Motorcycle Trial with a difference! It has the additional test of reliability over long distances with riders completing up to 100 miles each day over six consecutive days. Each day they will take on a combination of rough moorland, rocky tracks and public roads in the best – and worst – weather the Highlands of Scotland can throw at them! Each daily route is designed by the Clerk of the Course to challenge the ability, experience, strength and stamina of each rider. To ride 100 miles and negotiate 30 sections each day for six consecutive days requires strength, expertise and exceptional reliability from both rider and machine.

THE 2-WHEELED GODS OF GRAVITY ARE BACK IN THE FORT, RETURNING FOR THE 19TH CONSECUTIVE EXPLOSION OF SKILL AND SPEED ON THE SLOPES OF AONACH MOR, 6-7 JUNE.

IF YOU’VE BEEN BEFORE, YOU’LL KNOW WHY THE FORT WILLIAM WORLD CUP IS SO UN-MISSABLE. IF YOU’RE THINKING OF MAKING THE TRIP, COME AND JOIN US FOR ANOTHER LEGENDARY CELEBRATION OF BIKING ACTION. GRAVITY. IT’S THE LAW IN THE FORT.

ADVANCE TICKETS SAVE YOU MONEY AND GUARANTEE ACCESS TO THE ALL-IMPORTANT GONDOLA OPTION. GONDOLA TICKET NUMBERS MAY BE LIMITED, ESPECIALLY ON THE SUNDAY.

There are no upcoming events to display at this time.

I don't usually post jobs on here but I’d love the job myself 🙂 there simply is nothing better than brewing beer 🍺 ... See MoreSee Less

When this happens, it's usually because the owner only shared it with a small group of people, changed who can see it or it's been deleted.
View on Facebook
·Share

Share on FacebookShare on TwitterShare on Linked InShare by Email

We use cookies to ensure that we give you the best experience on our website. If you continue to use this site we will assume that you are happy with it.Ok